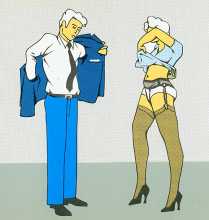 Feuer im Weizen is very much a product of its time – the source images are simplified and crudely-coloured  suit-and-suspenders line art, and the image manipulation, while very much at the leading edge of what was possible with 1970 computers, now seems very contrived. It is hard from the standpoint of half a century later to remember that computer graphics were still in their infancy at the time, and how experimental Bayerle’s creations were.