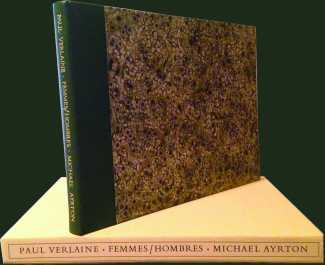 The poems illustrated by Ayrton in this portfolio are two of Verlaine’s three notorious Oeuvres libres  – Les amies (1867), sonnets in praise of lesbian love; Femmes (1890), a homage to Verlaine’s women friends and lovers; and Hombres or Hommes (1890), inspired by his homosexual experiences. Though officially banned by the French government until 1949, they circulated widely underground, and were illustrated by many important French illustrators, including Georges Annenkoff, Paul-Émile Bécat, Jean-Gabriel Daragnès, Roger Descombes, May den Engelsen, Luc Lafnet and Berthomme Sainte-André.

In this edition the poems are printed without translation, and the illustrations relate to fourteen of them, eight for Femmes and six for Hombres. The frontispiece depicts Verlaine and Rimbaud, with a naked female figure in the background. Ayrton’s etchings are a perfect complement to Verlaine’s verses, direct and unashamed, clean and almost clinical in their depiction of shared sexuality. Many feature the bearded and bald Verlaine himself, underlining the autobiographical aspect of the text. 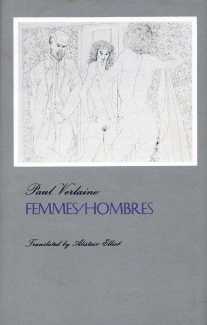 Two of Ayrton’s plates were reproduced on the dustwrapper of the 1979 translation of Femmes/Hombres, translated by Alistair Elliot and published by Anvil Press Poetry. The translation now sounds a little dated, but so are Verlaine’s poems, so in many ways they reflect the perfectly the poet’s explicit sexual language and imagery.

The Ayrton-illustrated Femmes/Hombres was published by Douglas Cleverdon for The Arcadia Press, London, in a numbered limited edition of 120 copies, of which 85 were signed on each plate by Ayrton.