Clara Tice’s last major book illustration commission was for an English-language edition of the works of the seventeenth-century French fabulist Jean de La Fontaine, published in Holland by G.J. Thieme of Nijmegen, but destined for members of the select American ‘Falstaff Connoisseur Collectors’. 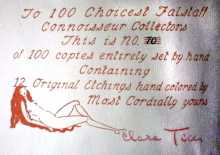 Inside the front cover of each two-volume set is a hand-signed note from the illustrator, saying ‘To 100 choicest Falstaff Connoisseur Collectors this is no. x of 100 copies entirely set by hand containing 12 original etchings hand colored by most cordially yours, Clara Tice’. The most expensive five copies also included two original coloured drawings. That must have been a considerable amount of work.

The twelve plates are darker and more detailed than her earlier work, which may simply reflect her response to the text, but there is also a sense of her having made an effort to achieve a more antique effect. There is also humour in these intimate scenarios depicting the tales of France’s master story-teller.