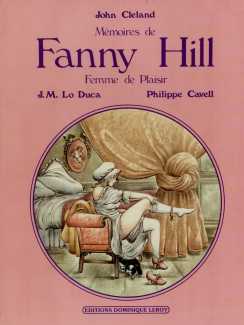 In illustrating Fanny Hill, Cavell demonstrates his ability to match style with content. This is not the brooding menace of L’ermite de l’Apennin; here the action is domestic, restrained, detailed, carefully observed. This is the best recent graphic interpretation of John Cleland’s text; unfortunately it only treats of the first part of Fanny’s experiences, and was the last of Cavell’s bandes desinées, but maybe it is best to bow out while you’re ahead of the game.

We have included here the first sixteen of the complete book’s 48 pages.

The Cavell version of Fanny Hill was published by Éditions Dominique Leroy.