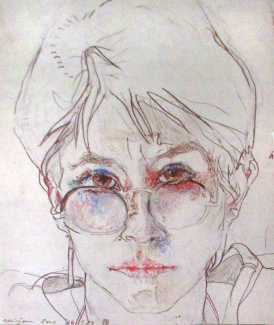 In the summer of 1948, while Janssen was studying at the Hamburg Landeskunstschule under Alfred Mahlau, he met Judith Madlung (born Judith Klaasen, 1928–2012), who was studying sculpture in a neighbouring studio. Judith was recently married to Malte Madlung, but there was a strong attraction, and after a brief affair Judith moved in with Horst, staying for nearly a year.

When Judith decided to move out again and go back to Malte, there were dramatic scenes involving Horst and Malte in a drunk brawl. It was clearly a serious matter, as Janssen was charged with attempted murder and taken into custody for two months. In 1960 Judith and Malte had their only child, a daughter they named Mirjam.

In 1984 Mirjam Madlung decided that she would like to hear about Janssen’s part in her parents’ encounter with the now-famous artist, so arranged to visit him and get to know him. Janssen wrote of the encounter, ‘It became a sweet divertimento in which the intelligent child urged me to write down the story of her young mother’. Being Janssen, he chose to do it in a series of drawings and etchings, which became Briefe an Mirjam (Letters to Mirjam). Janssen also made a a number of portraits of Mirjam, some of which are included in a small pamphlet that she published entitled Der alte Mann und das M. 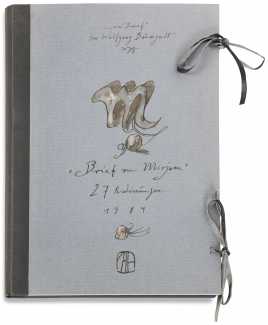 The 27 coloured etchings, printed in a limited numbered edition of 100 by Janssen’s long-term printing partner Hartmut Frielinghaus, are some of the artist’s most sexually explicit, most of them featuring Horst himself with two gaunt and angular women (Judith and Mirjam?), and many alluding to a degree of sexual violence. There is anger and passion, lust and longing in these powerful images.

Today Mirjam is a freelance editor and translator based in the Schleswig-Holstein coastal town of Meldorf; she is probably best known for her translations of Georges Simenon’s Maigret novels into German.