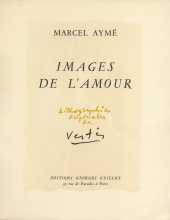 Images d’amour (Images of Love) is one of the last portfolios that Vertès produced, a joint project with the equally prolific French author and screenwriter Marcel Aymé. Aymé (1902–67) had many literary succeses under his belt, beginning with La jument verte (The Green Mare) in 1933, a dark satire about sexuality. As a satirical portrayal of manners, Marcel Aymé's work is often described as a disillusioned look at a mediocre world. His use of everyday language, whether from Paris or from the country, and his ability as a storyteller, made him one of the most original writers of his time. His best-known novel is Le Passe-Muraille (The Man who Walked through Walls) of 1943, which was much-translated and made into a film.

Both men now in their dotage, the joint commission for Images d’amour sees them reliving the memories of youth, of beautiful young women lounging on the beach, in summery gardens, or in their sunlit bedrooms. The text is semi-autobiographical, and maybe some of Vertès images are too.

Images d’amour was published by Éditions Georges Guillot in a boxed, limited and numbered edition of 190 copies.