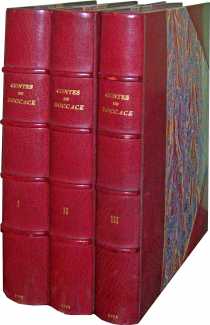 The high point of Mariette Lydis’s career as an illustrator came in 1935, when Paris-based publisher Le Vasseur commissioned her to produce fifty-six colour illustrations to accompany a three-volume de luxe limited edition of Boccaccio’s famous Decameron. The hundred tales in the collection by the fourteenth-century Italian writer Giovanni Boccaccio include many which are highly erotically charged, and Mariette’s distinctive style was ideally suited to the project. Variety, inventiveness, experimentation and colour are here in abundance, and show her to be a talented artist/designer with a range of creative ideas that went well beyond her trademark soft nudes.

Of the fifty-six plates, 42 were bound into the books and the remaining fourteen were included as separate plates with a sheet explaining which pages of text they illustrated. The Le Vasseur edition was produced in a numbered limited run of 956 copies, the 56 on more expensive paper and the inclusion of an original watercolour and the copper plate that the illustration was printed from.