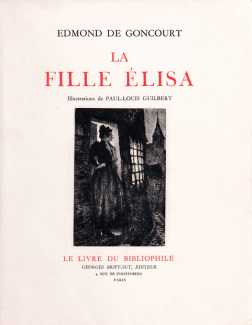 La fille Élisa (The Girl Elisa), a novel of manners by Edmond de Goncourt and published in 1877, tells the pitiful fate of a prostitute sentenced to death, ending her miserable life in a women’s prison. Elisa, the daughter of a greedy Parisian midwife, works in several brothels and on the pavement; she falls in love with a soldier whom she kills in a moment of confused identity. Condemned to death and then pardoned, she sinks into madness. Vividly portrayed, the novel is a violent indictment against social injustice and the cruelties of the penitentiary system.

Gustave Flaubert wrote of La fille Élisa, ‘In Elisa the instinct of revolt has become more accentuated, since it is coloured by the hand of justice. In this world of women, almost entirely composed of thieves, Elise’s integrity lends her something proud and indignant.’

In a contemporary review of this illustrated edition, the critic André Doderer wrote, ‘Rarely does such a conscientious artist love his art with this much fervour and understanding of the work he is illustrating. One feels that he was enamoured of the work, yet able to choose the most significant passages for illustration. This remarkable volume allows us to appreciate Paul-Louis Guilbert’s effort and understanding.’ Guilbert’s illustrations for La fille Élisa are raw and dark, and paint a vivid picture of late nineteenth-century prostitution.

La fille Élisa was published by Georges Briffaut in a limited numbered edition of 425 copies.