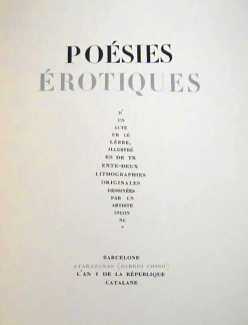 The extraordinarily prolific writer and poet Pierre Louÿs wrote hundreds of poems during his short productive period between 1896, when his most famous work, Aphrodite, appeared, and 1906 when he virtually stopped publishing. Of that vast output, at least half of his poems were on one of his favourite themes – sex.

This edition of Pierre Louÿs’ Poésies érotiques makes every effort to cover its tracks; both author (‘auteur celebré’) and artist (‘artiste inconnu’) are unnamed, and the volume says it is published in ‘Barcelone, Atrazanas (Barre Chino), L’an 1 de la Rèpublique Catalane’ (Barcelona, in the first year of the Catalan Republic). In fact it was privately published in Paris in 1938, in a limited numbered edition of 135 copies, or which this is the only copy which was hand-coloured by Vertès.