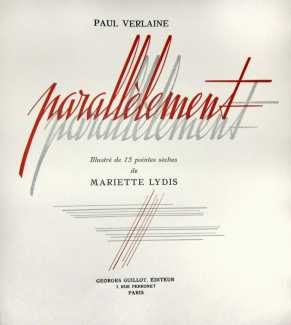 One of Mariette Lydis’s last major book commissions was from Paris publisher Georges Guillot, who in 1949 asked her for fifteen engravings to illustrate Paul Verlaine’s poetry collection Parallèlement, first published in 1889. Parallèlement was a popular subject for illustration, largely because it includes the two lesbian-themed cycles ‘Les amies’ and ‘Femmes’, so it is not hard to see why Mariette was an obvious choice for the Guillot edition. The quality of the illustrations varies, at least two or three of them rising above the popular soft nude style of the period to express a real depth of feeling and personal involvement.

The portfolio included two sets of the drypoint etchings, one in monochrome and one hand-coloured, the colouring done by Nadine Guillot, the publisher’s wife, who was a personal friend of Mariette’s. A more expensive version included an additional five more explicit plates, and the limited edition comprised 560 numbered copies.