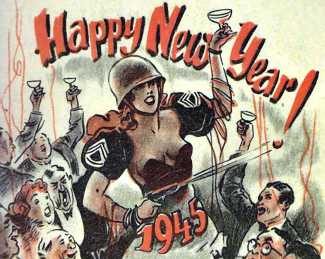 All the major combatants involved in World War II used pornography as a small part of their psychological operations strategy. This mostly involved dropping propaganda leaflets using sexual themes from the air, in an attempt to demoralise enemy soldiers at the front. These materials are now collected avidly by historians, and they are also an important source for anyone interested in the role of sexual psychology in warfare. Why was such imagery used? Did it work?

The original intention was to remind soldiers what they were missing while on active duty, so did soldiers finding the leaflets become emotionally crippled and unable to carry on their duties and responsibilities? In fact just the opposite occurred. The ‘pin-up’ pictures became collectors’ items sought after by the troops who greedily collected and swapped them. If anything, the leaflets raised morale. There is no doubt that they were heartily appreciated, and were probably the most widely read and circulated enemy documents of any war.

At the end of the war collecting such trophies continued, as with this set of bilingual cards published in Paris, just in time for departing Allied troops to bag a set before heading home. ‘Doudou’ (the artist’s signature) is French for teddy bear.

If you are interested in the role of sexual imagery during the Second World War, Herbert Friedman has written a fascinating illustrated article about all aspects of the subject, which you will find here.