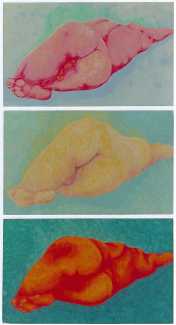 After moving to Frankfurt in 1990, and following several years when she found it almost impossible to create anything, Patricia Boulez found the inspiration she had been searching for. She wanted to show real men as objects of desire, not holding back on what was so often deliberately omitted or minimised – their wonderful genitals. She looked for men to draw through newspaper adverts, or men who spoke to her on the street. Each of her models was clearly informed about her intentions, and volunteered to participate in her artistic exploration.

In a letter to her friend Martine, she wrote about the creation of her naked men drawings: ‘If I want to continue my drawings, I will have to come up with a strategy for the models. I’ve checked out all of the professional models here in town. How can you get men to pose, and where do you find them? On the street, as I’ve sometimes felt like doing? For the moment I have a pool of sketches that will last at least a year. Why don’t I tackle a second series? Who knows. Laziness, winter? For fifteen days now I haven’t opened my eyes before ten o’clock. Breakfast, household chores, kitchen, and the morning is over. It’s strange being an artist. But when I am at work, it becomes a source of real pleasure. It’s the overwhelming joy that keeps me going.’