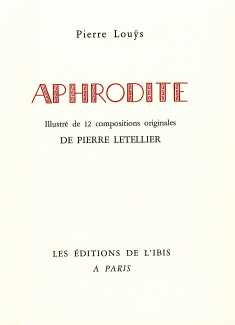 Pierre Letellier’s interpretation of Louÿs’ text for Les Éditions de l’Ibis are very early 1970s, verging on the sensationally lurid, but they do have a certain period charm, and remind those who were young in 1972 of the state of titillating artwork at the time.