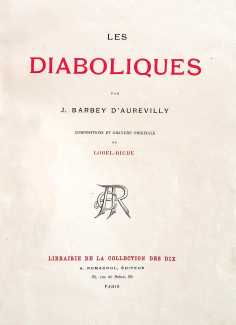 Les diaboliques (The She-devils) is a collection of stories written by Jules Barbey d’Aurevilly (1808–89), first published in 1874. Barbey d’Aurevilly’s stories are characterised by their subtle, provocative and satirical prose, which mixes both realistic and fantastic elements. Throughout his life he wrote numerous novels including L’Ensorcelée (The Bewitched, 1854) and Le Chevalier des Touches (The Knight of Touches, 1864). However, his masterpiece remains Les diaboliques.

Each of the six stories in Les diaboliques features a woman who commits an act of violence or revenge, but the deeds committed by the characters are not all induced by their extreme passion; they are just as often the result of boredom. Some of the characters spend hours playing whist, while others take delight in wearing fine clothes. All of the female characters are strong and independent, and are also very good at concealing their passions.

The cruel imagination of d’Aurevilly clearly appealed to Alméry. As Henri Babou writes in the introduction to his 1929 study of Lobel-Riche, ‘d’Aurevilly’s harsh, colourful, proud style well matches the artist’s imagination. Unlike tamer illustrators, he produces a vision which further increases the mystery of souls. Far from being concerned by their strangeness, he explores it and seeks to make the heroines of these unusual stories plausible. Of their demonic souls he shows us their all-too-human aspects.’

In 1937 Rombaldi commissioned seven new illustrations from Lobel-Riche for a smaller and more affordable edition of Les diaboliques; you can see these here.