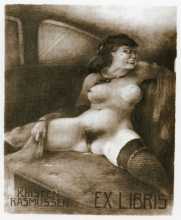 Jean Morisot was very discriminating when it came to the design and collection of Ex Libris, the bookplates designed to be attached to the inside cover of volumes in a collector’s library. ‘I do not collect boring, bland, tasteless Ex-Libris – heraldry, calligraphy, landscapes, etc – but only what lives, animals, people, and preferably female subjects,’ he wrote, ‘The important thing is that they are artistic. And I apologise if I do not share your tastes.’

His production of Ex Libris took second place to his medical profession during the 1930s, but after the Second World War, and increasingly into the 1950s, it became his primary artistic interest alongside a parallel involvement in ceramics, where he was both collector and a talented potter. In the early 1950s he started working on a series of Ex Libris for l’Association Belge des Collectionneurs et Dessinateurs d’Ex-libris (ABCDE, the Belgian Association of Collectors and Designers of Ex-libris, which was finally published in 1956. This period was the most productive in Morisot’s life in relation to the creation of Ex-Libris. It was largely through ABCDE that he came into contact with other important Ex-Libris collectors, and he counted among his friends Karl Astor from Hanover, Albert Collart from Brussels, Aldo Coppa from Pescara, Marcel Luquet from Gers, and Norman Shaftel from Brooklyn.

It is thought that Jean Morisot produced more than three hundred Ex Libris, many of which are considered classics of the genre.