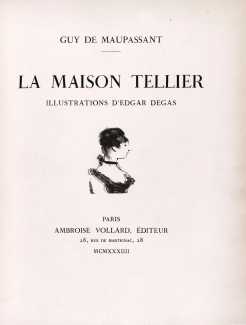 When this Degas-illustrated Éditions Ambroise Vollard edition of Guy de Maupassant’s well-known story was published, the artist had been dead for seventeen years. It is unclear, and rather unlikely, that most of the Degas prints included in the book were originally intended as book illustrations, so this portfolio is in many ways more the story of the almost-equally famous art-dealer Ambroise Vollard as it is of the artist.

Written in 1881, La Maison Tellier tells of the madame of a small-town brothel in Normandy who receives an invitation to her niece’s confirmation from her brother, who knows nothing of her ‘business’. She decides to take her five girls with her, and her regular patrons are taken aback when they discover the establishment is closed without explanation. Degas would undoubtedly have known the Maupassant story, and several of the plates do appear to reference the text. Most of the others are good generic illustrations of brothel life; some of the smaller in-text vignettes may not be by Degas at all.

Ambroise Vollard (1866–1939) is regarded as one of the most important dealers in French contemporary art at the beginning of the twentieth century. He is credited with providing exposure and emotional support to numerous then-unknown artists, including Pierre Bonnard, Edgar Degas, Paul Cézanne, Aristide Maillol, Pierre-Auguste Renoir, Louis Valtat, Pablo Picasso, André Derain, Georges Rouault, Paul Gauguin and Vincent van Gogh. He was also an avid art collector and publisher, who had a sharp eye for emerging trends and clever ways of capitalising on his contacts and investments. By the time he died in a car accident, his collection contained more than ten thousand works of art.

One of the ways in which Vollard made the most of his protégés was to invite ‘his’ artists to illustrate books which he then published in expensive limited editions, starting with a Bonnard-illustrated Daphnis et Chloé in 1900. For the next three decades Éditions Ambroise Vollard produced volumes illustrated by Rouault, Dufy, Picasso, Maillol and Derain.

When Degas died in 1917, the bulk of the remaining monotypes (after René Degas, the artist’s brother, had unfortunately destroyed those he felt the most explicit) were bought by Vollard before the main sale of the contents of the painter’s studio. Vollard was well aware of the publishing potential of the Degas prints, and working with the master copper engraver Felix Potin and woodcut expert Georges Aubert recreated this set of prints for La Maison Tellier and another set the following year for Mimes des courtesanes.

Potin and Aubert succeed wonderfully in capturing the sensitivity of the drawing and the subtlety of Degas’ originals. Originally planned for publication in 1930, in the end it took the company six years  to publish the two books.

The Degas-illustrated La Maison Tellier was published by Éditions Ambroise Vollard in a limited numbered edition of 305 copies.