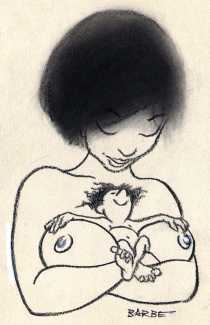 ‘La mour ou l’amor!’ (Death or Love!) is the main cartoon sequence from the 1983 Gentilly Strips volume. We have included it partly because it is probably the longest image-only narrative ever created by Barbe, and partly because it references his early career as a trainee pilot.

Having finished her manual labour, a young woman decides to strip off and sunbathe, only to be harassed by an annoying little aeroplane. After several dramatic and imaginative transformations she manages to crush the plane under her bare foot, but then the battle begins in earnest as she takes over the cockpit.

‘La mour ou l’amor!’ can be enjoyed as a twist-and-turn graphic story, but for anyone interested in power relationships and sexual politics there are deeper – and probably on Barbe’s part subconscious – themes worth considering. Sexual harassment, consent, and the question of who wins out in the end, are all implicit in this intriguing story.