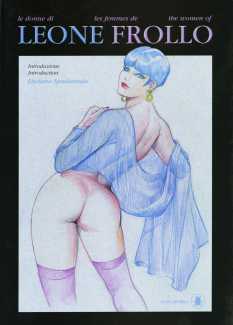 Le Donne di/Les femmes de/The Women of Leone Frollo is the most representative of Frollo’s artwork featuring scantily-clad woman. It was published by the Italian publisher Lo Scarabeo, and has been out of print for several years. As well as more than fifty drawings and paintings, the book includes probably the best – though rather rambling – biographies of Frollo, written by his friend and colleague Luciano Spadanuda.

The sense which emerges from Frollo’s work is that he produces, albeit often technically sound, very stereotyped images of fantasy women from an unspecified period of the 1910s and 20s. Is this because he knows what sells best, or is it because he wanted to spend time in the Mona Street world of garter belts, lacy underwear and black stockings?

Here we reproduce just some of the more original of the artwork from Women, including some of the pencil drawings, which being more quickly done are possibly closer to Frollo’s innate creativity.