It was not long after he had moved to Paris in 1921 that Vertès was introduced to the author Pierre Mac Orlan, and it is easy to see why the two men found interests in common; in 1925 Mac Orlan asked Vertès to illustrate his new novel of Parisian brothel life. It was published anonymously in 1926 by the publisher Paul Cotinaud, with seven coloured illustrations by Vertès. 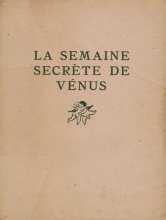