His first portfolio, Becker Baby, was published in Budapest in 1920, consisting of ten slightly risqué portraits of young women, the title being a wry sideswipe at the saccharine paintings of babies by the German-born American artist Charlotte Becker (1907–84) which were very popular at the time. 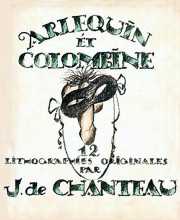 If Becker Baby was risqué, Arlequin et Colombine, published five years later under the ‘French’ pseudonym of J. de Chanteau, was altogether more explicit. Arlequin et Colombine (Harlequin and Columbine in English and Arlecchino and Colombina in Italian) are stock figures in the Commedia dell’Arte, a form of Italian theatre extremely popular in the eighteenth century, in which the same recognisable characters play well-defined roles in different scenarios. Harlequin, characterised by his chequered costume, takes the role of a light-hearted, nimble and astute servant, often acting to thwart the plans of his master Pierrot. Harlequin is madly in love with Pierrot’s wife, Columbina, competing for Pierrot’s pedestrian affections towards her with wit and resourcefulness.

In Szántó’s version Herlequin’s approach to the naked Colombine is brazenly sexual, and she is clearly wide open to his advances. Sadly, as in many Commedia dell’Arte performances, it all ends in tears when Pierrot discovers the lovers in flagrante and forbids their liaison, whereupon the impetuous Harlequin decides to end it all.