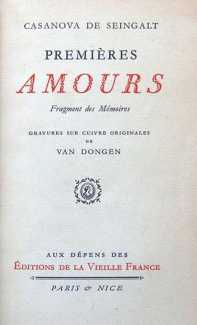 Premières amours: fragment des mémoires (First loves: a fragment of memories) consists of a well-known section of Casanova’s memoirs in which he recounts  how, at the age of 21, he saved a wealthy Venetian senator after an apoplectic fit. The grateful noble, Don Matteo Bragadin, adopted the charismatic young man and showered him with funds, thus allowing him to live like a playboy aristocrat, wear fine clothes, gamble and conduct high society affairs. ‘My currency was an unbridled self-esteem,’ Casanova notes in his memoir of his youthful self, ‘which inexperience forbade me to doubt.’ Few women could resist. One of his most famous seductions was of a ravishing, noble-born nun he identifies only as MM (most likely Marina Morosini). Spirited by gondola from her convent on Murano Island to a secret luxury apartment, the young lady ‘was astonished to find herself receptive to so much pleasure, for I showed her many things she had considered fictions, and I taught her that the slightest constraint spoils the greatest pleasures.’ The long-running romance blossomed into a ménage à trois when MM’s older lover, the French ambassador, joined their encounters, then to à quatre when they were joined by another young nun, CC (Caterina Capretta).

For this commission van Dongen, limited to pen and wash instead of his usual colour, produced a portfolio of simple drawings which successfully capture the youth and vitality of the young Casanova and his lovers.