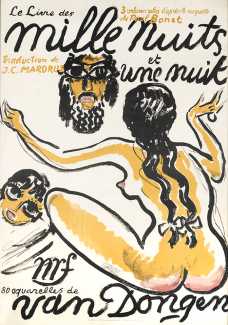 The Gallimard commission for eighty illustrations to accompany Le livre des mille nuits et une nuit (The Book of The Thousand and One Nights) was the last major portfolio that Kees van Dongen produced, and the colourful paintings beautifully capture his trademark style. In the winter of 1910–11 van Dongen had visited Spain and Morocco, the first time he had been able to observe Moorish architecture, with its palaces and mosques with their fascinating minarets, the contrast of dark passages and dazzling white walls baked by a scorching sun, and that experience is evident in this portfolio.

Le livre des mille nuits et une nuit was first introduced to Europe through the translation of the French Orientalist Antoine Galland (1646–1715), but it is the translation of Joseph Charles Mardrus (1868–1949), published from 1898 to 1904, that is the best known, and which in turn was translated into English by Edward Powys Mathers. Mardrus’s version of The Thousand and One Nights is idiosyncratic; much of the homosexual material, for example, is an absolute invention of Mardrus himself, and so confuses the issue of actual homosexuality in the Nights, of which there is a substantial amount. Mardrus claimed that his translation was based on a previously unknown Tunisian text, but this fictional manuscript was never seen by anyone else. 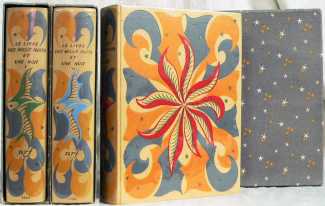 Kees van Dongen’s illustrations are as idiosyncratic as the text, displaying a colourful set of characters which too often verge on the stereotypical and potentially racist. But it is important to remember that they were produced seventy years ago, and at the time both his French readers and the inhabitants of the oriental places they wanted to visit pandered to that view of culture. Viewed through the lens of the intervening period, van Dongen’s colourful images are still full of vitality and imagination.

The Gallimard Le livre des mille nuits et une nuit was published as a three-volume boxed set with an embossed van Dongen designed cover to each volume; the slipcases and endpapers feature a star pattern.