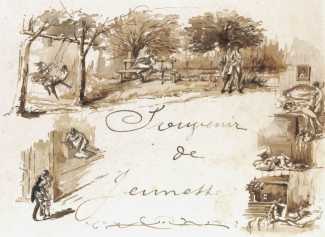 The plot thickens, as some of the printed sheets assumed to have been modestly covering the drawings bear the imprint of the Paris printing firm Aubert, who were located in Place de la Bourse in the first half of nineteenth century, and ceased business in 1853. Of course the pages they printed would still have been around in 1915, but it seems that both the date and Parisian origins of the sheets are designed to help ‘age’ the drawings.

So if they are not by Zichy, who are these accomplished watercolours by? The best guess would appear to be the Croatian artist Robert Auer, as both settings and poses are very similar to some of his 1906 Mlada Ljubav series, which you can see here. This still leaves unanswered questions. Why would Auer want to pass himself off as ‘Zichy’ when he had a perfectly good reputation for erotic art on his own account? Why does the portfolio have a French title and the remnants of French pages, when we know that the closest to Paris that Auer ever worked was Munich? Did Auer have a rich, secretive Parisian client who sometimes visited Zagreb?