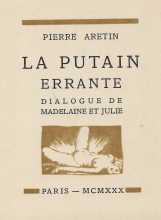 So-called ‘whore dialogues’ were a favourite literary form in late fifteenth and early sixteenth century Italy, and Pietro Aretino (1492–1556) was the master of that form. His Ragionamenti, or Dialogue of the Courtesans, is the best known, but several other similar texts exist, some of which are known to be by him and others almost certainly by other writers cashing in on his popularity.

La putain errante was privately published in Paris, in a numbered edition of 150 copies. A second edition, again of 150 copies, was produced four years later.

We are very grateful to our French friend Frédéric for sharing these images with us.