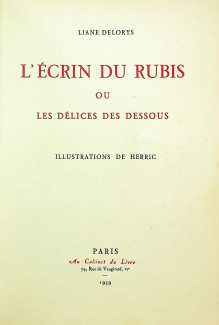 L’écrin du rubis, ou les délices de dessous (The Jewel Case, or the Delicacies Underneath) is one of several similar volumes by ‘Liane Delorys’, he pen name of a woman whose real name was Donville and who also wrote under the pseudonyms Liane Lauré, Liane de Lorys, Liane de Lauris and Lucette de Chatay. The jewel case is the embroidered satin or cotton fabric which hides the feminine jewel ​​from the curious, for which Herouard, using his Herric pseudonym, is the ideal illustrator.

The ten plates depict the undersides of various young women, their ‘enlightenment sessions’ and experiments in spanking. The text is light and frothy, a series of accessible scenes of undressing and mild debauchery.