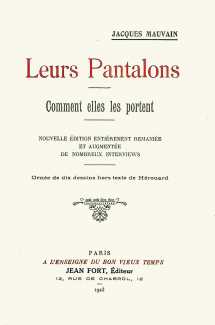 Leurs pantalons; comment elles les portent (Their Knickers; How they Wear Them) is where Hérouard cut his teeth on book illustration. The commission came from Jean Fort, the master publisher of clandestine material in the early twentieth century,  who would have seen Hérouard’s magazine illustrations and recognised a talent appropriate to his growing list.

‘Jacques Mauvain’ is a pseudonym, for whom we do not know, but ‘mauvain’ translates roughly as ‘mischief-maker’. The text purports to be a series of ‘interviews’ with young women about how they appreciate their different forms of underwear. It was an interesting time in undergarment history, as after decades of divided ‘culottes’ and open ‘drawers’ French women had recently discovered the joys of simple cotton or silk knickers with an elasticated waist, which first went on general sale in 1918. They were still fairly long in the leg, usually with embroidered edges, but glimpses of the new-fangled knickers were rather daring, an opportunity not missed by Hérouard.