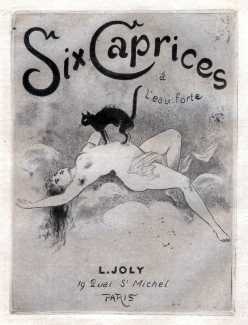 Apoux was a fine etcher who specialised in ‘acceptable’ erotica; his naked women are not particularly sexualised, but rather slightly humorous and suggestive of what promise their nudity holds. He tended to create highly-commercial sets of six prints rather than isolated compositions, with titles such as Danseuses, Sorcières and Zodiaque. Here is his Six caprices portfolio, a title which tellingly works just as well in English as in French – Les crêpes, Illusions perdues (Lost Illusions), Pudeur (Modesty), Harmonie, Hygiene and Carnaval. The black cat which appears in each scene is a typical Apoux element.