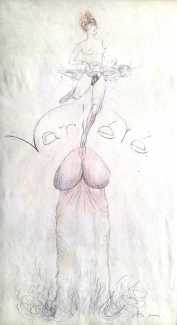 In April 2021 a portfolio of eighteen original drawings appeared in the catalogue of a Berlin auction house, drawings which bore such a resemblance to the Pipifax Erotische Grotesken that they had to be by the same hand; indeed one of them, the two men standing on a woman’s breasts and ejaculating into her mouth, was previously included in a set of Erotische Grotesken. Each of the drawings is initialled ‘HL’.

The portfolio included a set of titles in German, but as the titles may well have been added later this is no proof of a German origin for the drawings; indeed, the French title possibly argues for a French artist. It has been suggested that the ‘HL’ stands for ‘Henry Lamort’, the pseudonym used by Henrique Alvim Corrêa for his Visions erotiques, but Corrêa died in 1910 and the Variété portfolio bears all the hallmarks of the early 1920s.

The titles of the drawings, as given in the cover of the collection, are:
Varieté (Vaudeville)
Belastungsprobe (Endurance Test)
Wollust (Lust)
Der Lustmörder (The Lust-Killer)
Der Wagemut (Daring)
Wiederbelebungsversuche (Attempting Resuscitation)
(no title)
(illegible)
(no title)
Traum (Dream)
(no title)
Je länger je lieber (The Longer the Better)
(no title)
Im Clubsessel (In the Club Chair)
(no title)
Die Befruchtung (Fertilisation)
Die Brause (The Shower)
(no title)

Whatever the true origin of these drawings, it is fortunate that they have found a home with the companion Pipifax portfolio in the collection of our friend Hans-Jürgen Döpp, to whom we are very grateful for allowing us to add them to the site.