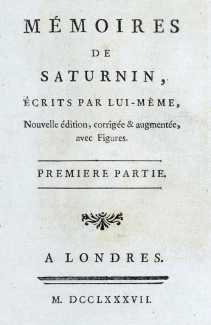 In France it was published under a variety of titles – Histoire de Dom B— (1741), Histoire de Gouberdom (1772), Le portier des Chartreux (1784), Mémoires de Saturnin (1787), and Histoire de Saturnin (1908). Translations into English appeared under a similar variety of titles, including The History of Don B (1743), The Life and Adventures of Silas Shovewell (1801), and The History of Father Saturnin, Porter of the Charterhouse at Paris (1827). Set in a landscape of religious lust, the novel advances the idea of a close link between happiness and the free expression of sexuality, characterised by the liveliness  and false naivety of the very readable text. Sex with and between clergy, monks and nuns is the order of the day, and the more that clergy and doctors rail against masturbation the more it is celebrated as an easy way of achieving pleasure.

The Borel-illustrated version of Latouche’s novel was published under the title Mémoires de Saturnin, and published in two volumes ‘in London’ (though probably in Paris), in an attempt to avoid French censorship.