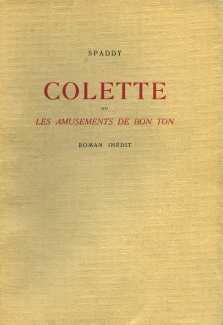 Colette, ou les amusements de bon ton (Colette, Good Time Amusements) was an important early commission from Bécat by the master clandestine publisher Maurice Duflou, to complement a text bordering on the outrageous by Johannès Gros, ‘the champion of polluted beauty which emerges from its stains intact’ according to Pascal Pia. Gros writes here under the pseudonym Spaddy, one of several he used during the 1930s.

According to Duflou’s friend Sarane Alexandrian: ‘The narrator of Colette exposes the actions of his mistress, a woman of the world who admits that she is extremely libertine, and loves fantasy and diversity. Colette is a nymphomaniac and an exhibitionist, indulging in sexual deviations in public, sometimes in the presence of her husband, an impassive and resigned witness. At twenty she has all the experiences of a long life as a seductress, and yet there is no face fresher than hers, a body more exquisite, young and virginal. Colette leads her lover on a frantic quest for pleasure which sometimes leads him to bawdy houses, soliciting partners like the transvestite Gaby.’

Created before Bécat became better known and started to tone down the explicit content of his illustrations, the Colette plates retain the experimental imagination and vigour of Huit images and Roi Gonzalve.