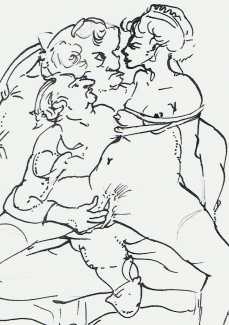 Following the commission for a Bataille portfolio, the same client commissioned a Sade portfolio from Milet-Desfougères, resulting in a powerful set of images which does full justice to the Marquis’s transgressive text.

La philosophie dans le boudoir (Philosophy in the Bedroom) was written in the form of a dramatic dialogue by Sade in 1795. Though initially considered a work of pornography, it has come to be considered as much a socio-political work as a sexual one. Set in a bedroom, the characters make the argument that the only moral system that reinforces the political revolution is libertinism, and that if people fail to adopt a libertine philosophy then democracy is doomed to failure.

Eugénie is a fifteen-year-old girl who at the beginning of the drama is a virgin, naïve about all things sexual, who has been brought up by her provincial, self-righteous mother, Madame de Mistival, to be well-mannered, modest, decent and obedient. Madame de Saint-Ange is a libertine young woman, the owner of the house and bedroom in which the dialogue is set. She invites Eugénie for a two-day course on becoming a libertine. Dolmancé is an older man, atheist and bisexual (though with a strong preference for men), and good friend of Madame de Saint-Ange’s younger brother, Le Chevalier de Mirval. Together Dolmancé and de Mirval take on Eugénie’s ‘education’. Augustin, Madame de Saint-Ange’s young gardener, is summoned to assist in advanced sexual activities.