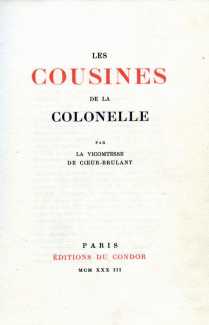 ‘One of the young woman’s breasts had half escaped from its white sheath and raised its little head eager for pleasure: delicately, Gaston seized it between his burning lips and rolled it gently. Julia, under this intoxicating caress, writhed with pleasure. With an invading hand, he stroked her back, slid down the groin, slowly climbing the hills; finally, he took hold of the young woman’s thighs with both hands, spread them apart, and ran his eager tongue over the pink contours which border the entrance to the temple of love.’

The 1880 edition was accompanied by a frontispiece from Félicien Rops, who also produced a much-admired standalone engraving based on the three women of Mannoury d’Ectot’s tale. Anras Szene/André Dugo illustrated the tale half a century later with some of the most explicit drawings to come from his stylish pen and brush. The enigmatic artist Fredillo also illustrated Les cousines de la colonelle, with seven plates made for an edition that was published by Brancart in Amsterdam in 1890.

In the novel sisters Florentine and Julia marry on the advice of their cousin, Colonel Briquart, whose widow is very much a woman of the world. Florentine and Julia’s discovery of the pleasures of sex and the search for pleasure is the driving force behind the book. Through a clear style and a study of the manners of her time, the Vicomtesse de Coeur-Brûlant shows her sense of observation and her ability to describe erotic scenes with finesse. The critic Sarane Alexandrian wrote of the novel, ‘if Mme de Mannoury was thus advising the clients of her marriage agency, she must have made people very happy’.

The Dugo-illustrated Les cousines de la colonelle was published in Paris by Éditions du Condor in a limited numbered edition of 300 copies.