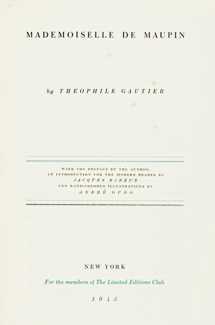 Mademoiselle de Maupin, French romantic novelist Théophile Gautier’s 1835 semi-biographical tale of the noted French opera star Mlle Maupin, who was a first-rate swordswoman and often dressed as a man. Originally the story was to have been about the historical la Maupin, who set fire to a convent for the love of another woman, but Gautier instead turned the plot into a simple love triangle between a man, d’Albert, and his mistress, Rosette, both of whom fall in love with Madelaine de Maupin, who is disguised as a man named Théodore.

Just ten years after his very explicit illustrations for Les cousines de la colonelle, and significantly marking the difference between pre-war Paris and post-war New York sensibilities, André Dugo was commissioned to produce a much safer set of illustrations for Gautier’s Mademoiselle de Maupin. Safe they may be, but they still bear all the hallmarks of a talented and original illustrator.

The Dugo-illustrated Mademoiselle de Maupin was published by The Limited Editions Club, New York, in a limited numbered edition of 1,000 copies.