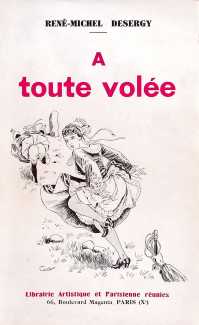 This late Carlo-illustrated novel, written by René-Michel Desergy, shows a more accomplished artist at work, paying attention to composition, shading and technique. And as Robert Mérodack writes in his 1984 overview of the work of Carlo, ‘The women depicted in Dolly, esclave and À toute volée are no longer constrained by the rigid corsets of Cuir triumphant and Dolorès Amazone. Their charm no longer comes from the constraints their garments impose on their figures, but on the contrary, from the new-found freedom of their movement.’

À toute volée (At Full Throttle) is a standard fictional first-person confession, this time of the initiation of Roberte, introduced by her teachers to the joys of submission, whip, and the all-important nettles. Desergy was one of the most prolific authors used by the Librairie Artistique et l’Édition Réunies, producing three or four spanking novels a year during the mid-thirties.