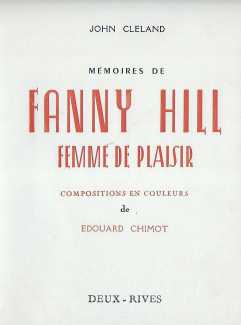 Although this portfolio was produced at a time when Chimot was working on an extended series of titles for Deux-Rives, it is the sanguine (blood-red) drawings rather than the rather anodine colour images which lift this Fanny Hill portfolio above the average Chimot offerings of the 1950s.

The Chimot-illustrated edition of Mémoires de Fanny Hill was published by Deux-Rives in a limited numbered edition of 900 copies.