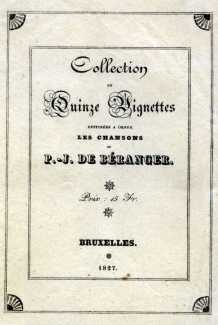 ‘I am quite a good poet,’ Pierre-Jean de Béranger (1780–1857) said of himself, ‘clever in the craft, and a conscientious worker to whom old airs and a modest choice of subjects have brought some success.’ His modest self-appraisal belies his importance in literary history. Larry Portis in his history of popular French music, French Frenzies: A Social History of Pop Music in France, describes Béranger as ‘the most popular French songwriter of all time’. When Pierre-Jean de Béranger first began to cultivate the chanson, it was a minor and little-regarded form, restricted to slight subjects and a humorous guise of treatment. He raised the standing of the art, imbued it with sentiment, and turned the French song into into an internationally-recognised art form.

Monnier was one of the first artists to illustrate Béranger, but by no means the last. His Fifteen Vignettes take some of Béranger’s most explicit verses and give them the light treatment and bright colour recently learned from Rowlandson and Cruikshank. Though the collection was actually published in Paris, the title page gives the more liberal Brussels as the place of publication to avoid possible censorship.