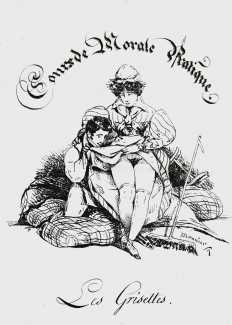 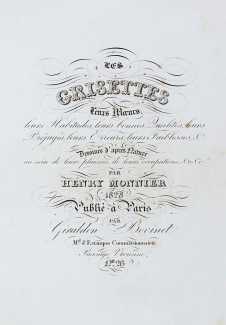 Not all the images in the collection come from a single source; some appear to come from the Cours de morale pratique (Instructions for Moral Practice), seventeen smaller ones from a separate collection called Grisettes. And what is a ‘grisette’? As Alexandre Dupouy explains in the preface to Les grisettes en enfer, a grisette refers to ‘a tender-hearted working class young woman of easy virtue’. Cours de morale pratique was in fact the much rarer ‘grisettes’ album that Monnier produced on the subject, the version for a mass audience being his 1828 portfolio Les grisettes: leurs moeurs, leurs habitudes, leurs bonnes qualités, leurs préjugés, leurs erreurs, leurs faiblesses, &tc, dessinés d'après nature au sein de leurs plaisirs, de leurs occupations, &tc, &tc (Grisettes: their manners, their habits, their qualities, their prejudices, their errors, their weaknesses, &tc, drawn from nature to reflect their pleasures, their occupations, &tc, &tc). Some title.

A portfolio of 42 colour plates, each with an appropriate caption, Les grisettes was one of Monnier’s early successes, putting both himself and the concept of the grisette firmly on the map of 1820s Paris. The clandestine follow-up of portfolios of engravings of grisettes in more daring situations was an almost inevitable development. Both this and the other 1829 portfolio shown here were probably not sold as a defined set; they were more likely collected into albums as their select audience were able to procure them.

The Astarte publication Les grisettes en enfer is a limited edition of 1,000 copies, of which a limited number are still available for sale from the publisher; for more details click here.