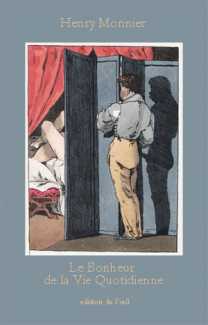 As Hans-Jürgen writes in the introduction to La bonheur (which can be ordered from his website), ‘Curiosity is the theme of the small watercolour which shows the viewer standing behind a screen. What does he see? Just crossed legs. But we can tell from his shadow just how much what we see arouses him. The showman with the peepbox also benefits from the voyeurism of his curious female visitors: they look excitedly into exotic possibilities.  Sexual curiosity is the source of all enlightenment, even for the little girl who looks carefully at the two zebras in the zoo. What does the mother reply to her innocently-asked question? A stocky Aphrodite raises her veil in front of the student who is amazed at her curves, awakening his desire. Is it the mother of the bride who, half hidden by the curtain, follows the loveplay of the young couple with greedy eyes? What is her left hand doing? And the scene which shows the gentleman in a yellow vest with two naive playmates in the hayloft is also about observing: they look in amazement at the strange self-erecting structure that escapes his trousers, but he delights in the vision.’