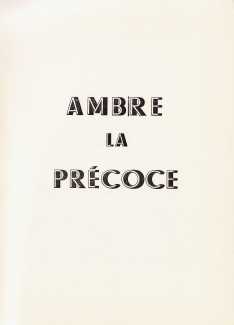 A rather strange and rare oddity of clandestine publishing, Ambre la précoce (Early Amber) is a mishmash of coming-of-age sexual adventures for a group of young (some of them very young) friends. Published ‘in Brussels’ (though probably from the publisher’s offices in Toulouse) by Françis Flores in 1956, it was almost immediately banned by the French censor, only to be reissued a couple of years later under the title Le démon des teen-agers.

Ambre la précoce was issued in a limited numbered edition of 800 copies.