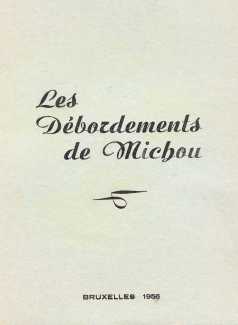 Published in ‘Bruxelles’ (though probably from the publisher’s offices in Toulouse) by Françis Flores, Les débordements de Michou (literally Michou’s Overflowings) is a self-explanatory title which tells you that this is yet another account of over-the-top sexual awakening. The text had first appeared in an anonymous text-only clandestine publication of 1903 entitled Roman de la luxure (Romance of Lust), so was an easy title for Flores to add to his list. As with many similar titles, it was almost immediately banned by the French censors.

Les débordements de Michou was issued in a limited numbered edition of 800 copies.