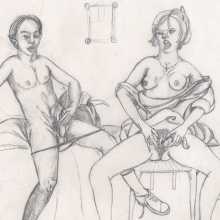 ‘Turpitude’, in both French and English, means something depraved, base and vile; its synonyms include abjection, corruption, debasement, debauchery, decadence, degeneracy, degradation, dissipation and perversion. When this portfolio of twenty-two drawings appeared in a French auction of ‘curiosa’ in January 2021 it appeared in three lots, each bearing the title of one of the drawings’ captions with the addition ‘et autres turpitudes’.

There is certainly a great deal of depravity in these scenes, but also much imagination, thought and skill. There are wolves, the serpent from the Garden of Eden, a Chinese statue – Sherlock Holmes even makes an appearance.

Most of the drawings are signed, the auctioneers thought as ‘CAB’, though it could just as easily be ‘CAZ’. They didn’t know the artist’s identity, and nor do we. But the chances are that somebody does, so if you can provide us with any leads do please let us know.