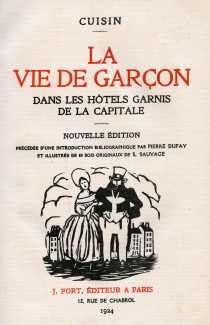 Yet apart from this edition of La vie de garçon, none of Cuisin’s work has seen the light of day for more than a century, which is a pity, as his descriptions of Paris establishments including the Hôtel garni de l’Infidélité, the Hôtel de la Petite-Vertu, the Grand Bazar de Vénus, and the Petite Société bourgeoise de la Volupté are all as fascinating and salacious as they sound. Cuisin was originally a soldier who retired early, and following the success of Le numéro 113 earned his living entirely from his writing, leaving him plenty of opportunity to explore the pleasures of the big city; hence the autobiographical nature of much of La vie de garçon.

Sylvain Sauvage’s deceptively simple woodcuts are the perfect foil to Cuisin’s text. They demonstrate that he was very comfortable with simple designs, the chapter tailpiece images especially capturing the varied character of the female denizens of the Parisian demi-monde.