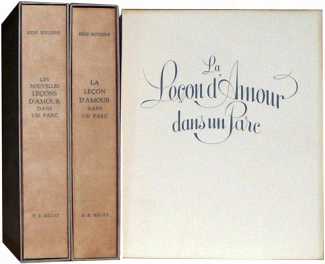 In the park surrounding the castle of the Marquis Foulques and the Marquise Ninon de Chamarante, to the west of Touraine in the Loire Valley, the installation of a statue of an adolescent Cupid, replete with all his virile attributes, inspires very diverse feelings for the women who see it. Some are repulsed, for others it has a magnetic attraction. Whatever their excuse, each of them finds excellent reasons to spend time with Cupid and the bathing pool at his feet.

As the years go by, Ninon gives birth to a little girl, Jacquette. It is agreed that the child should be kept away from the shameless spectacle of the statue, so Cupid and the pool are hidden in the heart of a labyrinth. These precautions, however, prove insufficient, so Jacquette’s godmother and housekeeper set about emasculating the statue. Meanwhile Ninon succumbs to the charms of Monsieur de Châteaubedeau, barely out of childhood, to the great despair of the Chevalier Dieutegard, who is secretly in love with Ninon. Dieutegard flees the castle and takes refuge in the hovel of a former gardener who also worships the Marquise. Both come secretly to maintain the labyrinth, the basin and the statue. Much heartbreak and a sudden death punctuate the narrative, but the novel ends with Jacquette’s godfather, the Baron de Chemillé, taking the opportunity to explain what she should know about the role and expression of love in all its forms.

The author of La leçon d’amour dans un parc (Love Lesson in a Park), René Boylesve (1867–1926), thought it was the best and most serious of his dozen novels, the saucy tale actually concealing a philosophical study, ‘combining the earthiness of Rabelais and the analytical mind of Voltaire’. Unfortunately La leçon d’amour has never been translated into English, but there is an online French text at the Gutenberg Project, which you can find here.

When Bécat was commissioned to illustrate La leçon d’amour, is would appear that the brief suggested a level of explicit nudity which had become post-war acceptable, which allowed him to demonstrate just how good he was at engraving naked women. Here Ninon and her friends are clearly drawn from life, and are almost touchable in their realism.