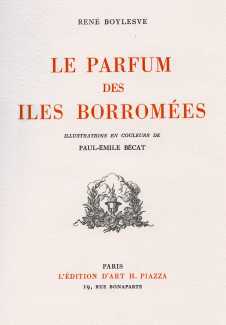 The tiny Borromean Islands in the Italian part of Lake Maggiore (it straddles the Swiss–Italian border) are a major tourist attraction, though most visitors today stay only for a few hours. A century ago it was rather different – the summer clientele often stayed for several weeks in nearby hotels enjoying the scenery, the tranquillity, and each other’s company.

One September towards the end of the nineteenth century, Gabriel Dompierre meets a beautiful Italian, Madame Luisa Belvidera, and it is love at first sight. For a month and a half, until Luisa’s husband arrives, she and Gabriel live out a fiery passion. Sharing the two men does not pose a problem for Luisa, but Gabriel finds it very difficult.

Alongside the main love interest, other relationships are forged between the holiday-makers. An English artist whom Gabriel meets on a lake cruise, Dante-Leonard-William Lee, has as a disciple of Schopenhauer no interest in love, yet the beautiful flower seller Carlotta falls in love with him, while he sees her purely as a source of inspiration. Then there is the English clergyman Lovely, with very rigid manners, who is perversely attracted to the French Madame de Chandoyseau.

The summer and the holidays come to an end, the hotel guests leave one by one, and Gabriel is the last to leave, having experienced to the full ‘the perfume exuded by the islands’.

The novel, written by René Boylesve in 1898, is his most autobiographical. Boylesve was well known for his amorous adventures, though he was also capable of detachment. Thus he puts much of himself and his own experiences into the character of the narrator Gabriel, though he can also identify with aspects of the over-rational Lee.

Le parfum des Îles Borromées was one of Bécat’s first commissions for a full set of book illustrations, and came from Henri Piazza, one of the most important early exponents of luxury illustrated limited edition book publishing. Bécat was to fulfil many subsequent commissions for Piazza and for its later reincarnation as Les Heures Claires.

The Bécat-illustrated edition of Le parfum des Îles Borromées was published by L’Édition d'Art Piazza, Paris, in a limited numbered edition of 450 copies.