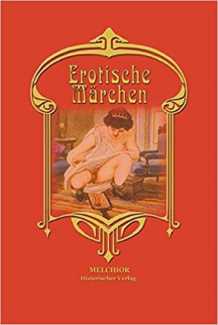 When sex became a hot topic again in the 1970s, several German publishers turned to the Stern collection and produced their own editions of Erotische Märchen – Tabu in 1970 and Widder in 1975, followed by Neues Leben in 1990, Zettner in 1995, and most recently Melchior in 2007.

These editions used different combinations of period images, some from Stern and others from various sources – the images shown here are from the Melchior edition. The Melchior version contains 35 tales, including The Frog King, Hansel and Gretel, Rapunzel and Snow White, all in rather grown-up variants with pictures to match.