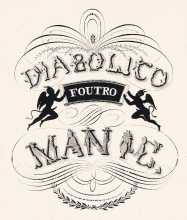 Diabolico foutro-manie, a portfolio of twelve prints, is for obvious reasons rarely found complete, and although generally attributed to Devéria because it is in a similar style to other work he produced in the 1830s, the attribution is by no means certain. It could just as easily be by the painter and engraver François Bouchot (1800–1842), who studied engraving under Théodore Richomme, Jean-Baptiste Regnault and Guillaume Guillon-Lethière, and won the Grand Prix de Rome in 1823.

As well as the original monochrome prints, coloured versions of several of the plates have also survived; these were almost certainly commissions made by wealthy purchasers of the portfolio, executed by professional print colourists.

In 1981 the specialist Geneva-based reprint publisher Slatkine produced a facsimile of the twelve monochrome plates, with a preface by the French writer and literary historian Jacques Duprilot.