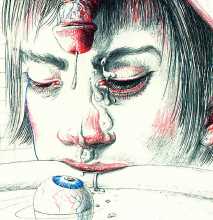 Narrated by an unnamed young man looking back on his exploits, Histoire de l’oeil describes the sexual perversions of a pair of teenage lovers. Simone is his primary female partner, but the narrative includes two important secondary figures, Marcelle, a mentally ill sixteen-year-old girl who comes to a sad end, and Lord Edmund, a voyeuristic English émigré aristocrat. Though often portrayed as pure pornography, interpretation of the story has gradually matured to reveal considerable philosophical and emotional depth, its imagery built upon a series of metaphors which in turn refer to philosophical constructs developed in Bataille’s wider work on the erotic, including the eye, the vagina, the anus, the testicle, the egg, the sun and the earth – conventionally uncomfortable connections which clearly resonated with Javier Gil when he produced these drawings to illustrate the story.

As well as drawing on the text, Gil also pays homage to Hans Bellmer’s 1947 illustrations for Histoire de l’oeil, which you can see here. There is a similar juxtaposition of the key elements in Bataille’s narrative, and the limited colour palette of black and red, contrasting with the blue of the eye, matches Bellmer’s stark style. Gil’s powerful interpretation, however, is entirely his own.