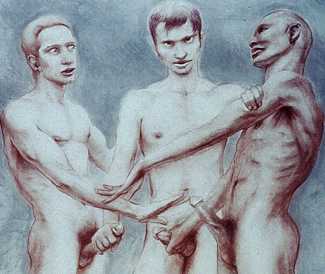 Although Les 120 journées de Sodome was first published in 1904, it was a poor edition; the Sade specialist Maurice Heine used the original manuscript, bought in 1929 in Berlin for the Vicomte Charles de Noailles, to produce the 1935 version. It was given an introduction and particular care was given to the printing, so in most respects this was the true first edition.

When Gil read Les 120 journées de Sodome, it was the homoerotic aspect of the text that clearly inspired this (for him) small series of images, utilising a limited colour palette to produce strong portrayals of group gay encounters which emphasise the violent aspect of Sade’s narrative.