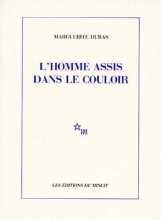 L’homme assis dans le couloir (The Man Sitting in the Corridor) is a novelette by the feisty French author Marguerite Duras (1914–96), published in 1980. In just 36 pages it explores the aftermath of a passionate and often violent sexual relationship, in the form of a monologue which contrasts the power of the liaison with the echo of still bodies and the disorder created by the storm. Duras takes her reader to the depths of animal madness, the characters imagined with rapier-like precision. Unlike the usual flourishes of many of her novels, the text is simple and direct, and sometimes written in the conditional tense, as if she wants to test the reader’s imagination, thus opening it to individual interpretation. 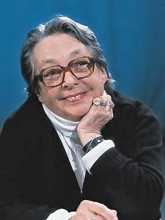 Duras, born Marguerite Germaine Marie Donnadieu in Vietnam (then French Indochina), divided her early life between Saigon and Paris, before becoming a highly successful author of many novels, plays and film scripts, including her best-selling, highly fictionalised autobiographical work L’Amant (1984), translated into English as The Lover, which describes her youthful affair with a Chinese-Vietnamese man. She was as uncompromising in her personal life as in her writing – in 1939 she married the writer Robert Antelme, but after nursing him following his incarceration in Buchenwald chose to divorce him in 1945. While married to Antelme, Duras acted on her belief that fidelity was absurd, and established a ménage à trois with the writer Dionys Mascolo, who fathered her son Jean Mascolo.

During the final two decades of Duras’ life she experienced serious health issues relating to alcohol and tranquilisers, and after being hospitalised in October 1988 she fell into a coma that lasted until June 1989. Paralleling her health issues, Duras had an important relationship with the gay actor Yann Andréa. These experiences clearly influenced her writing in L’homme assis dans le couloir, of which she wrote ‘I could not have written it if I had not lived it’.

As with Le mort, Duras’ narrative clearly struck a chord with Gil, who again produced a series of powerful images illustrating the important elements of the text.

L’homme assis dans le couloir was published by Les Éditions de Minuit; an excellent English translation by Barbara Bray, The Man Sitting in the Corridor, was published by North Star in 1991.