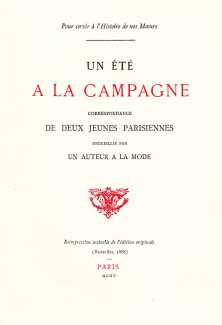 The text consists of the correspondence between Adèle and Albertine, adolescent school friends who are looking forward to the summer holidays in the French countryside with their respective families. They are also thinking rather a lot about sex. The book is written as a series of forty-one letters, describing in detail how their experiences of intimacy develop over the long hot months.

This 1905 edition, illustrated by Avril, was the first of several illustrated editions to appear between 1900 and 1930; Martin van Maele and Auguste Brouet were among the other artists to imagine the adventures of Adèle and Albertine. The Avril plates, as with his other work, are both sexually explicit and disarmingly honest.

The Avril-illustrated Un été à la campagne was published in Paris by Charles Hirsch, in a limited numbered edition of 300 copies. The first 30 copies contained an addition nine engravings; hand-coloured versions are known.